This is a list of known required representations of sex and gender identity.

A summary of SOME of the information below, provided by HL7 Germany, can be found here: Gender Coding with International Data Exchange Standards

The value domain for Sex consists of the following values

The value domain for Gender Identity consists of the following values:

Sex (METeOR identifier: 269716)1 data element concept related defines it as follows: Sex is the biological distinction between male and female. Where there is an inconsistency between anatomical and chromosomal characteristics, sex is based on anatomical
characteristics.

Gender (METeOR identifier: 635978)1 data element concept related defines it as follows: The way in which a person identifies their masculine or feminine characteristics. A person's gender relates to their deeply held internal and individual sense of gender and is not always exclusively male or female. It may or may not correspond to their sex assigned at birth.

The German cancer registry law provides for the following characteristics:

Until 2017, in  the CIHI Reference data Model (CRDM), sex and gender was used interchangeably. Gender was described as a code used to indicate the gender or sex of a person. Sex and Gender are two closely related, yet distinct concepts.

Ontario Ministry of Health and Long-Term Care (MOHLTC). As a result the updates were made to the sex and gender standards as shown below

The German legislation was changed in 2018

Gender can be specified:

HL7 International changed the term "sex" to "administrative gender" back in the nineties. This refers to how a person wants to be treated administratively. Thus, only the following values ​​are available, which are also sufficient:

Gender of the patient

The gender of the patient is transmitted in the xDT standard of the KBV in field 3110:

007060 EDI Standard and found the attached references to gender and sex.

Data Element 1068, titled Gender Code and defined as Code indicating
the sex of the individual

Identify the sex structure of a person or animal. Excluded are codes related to clinical gender.

The IAIABC EDI Medical Standards are used by claims administrators to report workers’ compensation medical bill data to U.S. jurisdictions.These standards are based on the October 2003 X12 standards, referred to as Version 5, Release 1, Sub-release 0 (005010) ©2004 Data Interchange Standards Association, Inc. (DISA) in its capacity as Secretariat to X12

Specified in a couple of places

The application used only supports

Unknown (in the instances where there gender is Unknown).

Regional labs also use Other which requires a resolution to Unknown if that truly is the case or if the gender just wasn't entered at order entry.

(n) Sex—(1) Standard. Birth sex must be coded in accordance with HL7 Version 3 Standard, Value Sets for AdministrativeGender and NullFlavor (incorporated by reference in § 170.299), attributed as follows:

has developed a Best Practice Recommendation for administrative sex and clinical patient gender used for laboratory testing and reporting. From the ONC ISA:

All Sex and Gender Value Sets currently in PHIN VADS are included in the spreadsheet below: 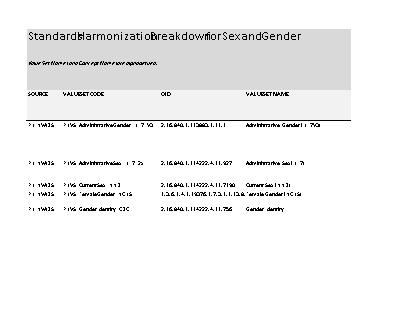 Attached is the article I was referencing. It includes:-the hemoglobin scenario-the conceptual idea of linking gender identity to birth sex-identifying pronoun data collection, organs for inventory, and common treatments and proceduresHopefully the references will include other helpful information, from social to EHR perspective!

From Unknown User (rjhorn) the Australian Government approach has a "Sex" value and a "Gender" value and each can have only one of three values: M, F, X. Only Gender is mandated for capture.