This FHIR resource needs to capture the following information: 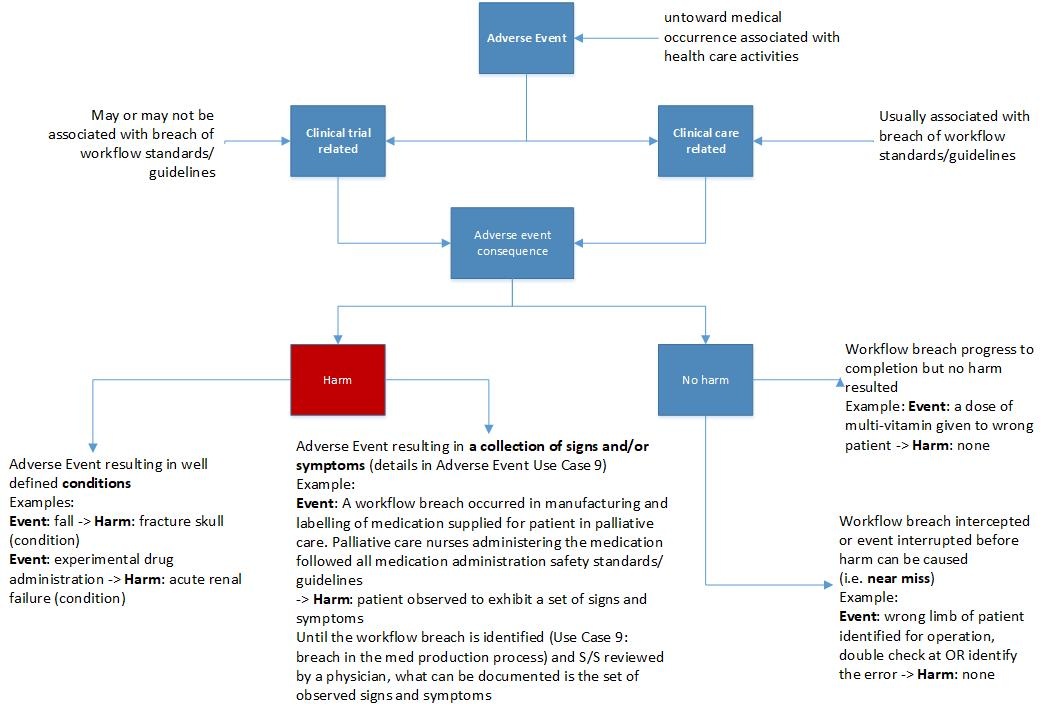 Scenario 1: When an adverse event resulted in harm, the harm can manifests as one or more conditions

For example: when a patient participating in a clinical trial and has a fall (event), the resulting harm can be fracture neck of femur (condition), fracture wrist (condition), concussion (condition)

The resulting harms can be captured using: AdverseEvent.Condition

Scenario 2: There are use cases in which harm(s) is/are presented a set of signs and symptoms experienced by the patient. Such case is illustrated by the following real-life clinical use case:

A 53 year old male diagnosed with polycystic kidney disease, hypercholesteraemia and hypertension was prescribed a calcium channel blocker by his primary care physician - Norvasc (amilodipine besylate) 10 mg/daily for management of his hypertension.

He was also being scheduled to receive haemodialysis for his end stage renal failure. His renal physician reviewed the patient's medication while he was waiting to go on dialysis, and halved his amilodipine dosage. The patient was given a new prescription: amilodipine apotex 5 mg/day.

The patient had an existing prescription from his primary care physician and dispensed by a community pharmacy:  the drug package and pharmacy label displayed: Norvasc 10mg, once daily orally.

The renal physician forgot to tell the patient to stop the Norvasc 10mg. The patient had his new prescription filled at the hospital pharmacy where he would receive his dialysis. The hospital pharmacy was not aware that the patient had a previous prescription of Norvasc 10mg, dispensed amilodipine apotex 5mg tablets. As "generic" prescribing and dispensing were standard practice of the hospital, the drug box and pharmacy label showed: amilodipine apotex 5mg, once daily, orally.

The patient assumed that these two drugs were different, continued to take Norvac 10mg daily and amilodipine apotex 5mg daily.

A week later, the patient started to experience swelling of his ankle and feet (and had to wear flip-flops to work) and increasing tiredness.

After two follow-up sessions, the problem was identified, and recognised as an adverse event.

In this use case, the problem of "drug overdose" was not identified till later.  At earlier stage of clinical assessment and documentation, only a set of signs and symptoms were identified and was assumed to be worsening of the renal failure.

Also, the problem of "drug overdose" - is it the adverse event? or the condition?

The AdverseEvent.condition element is not suited to support documenting adverse event "findings" or "reactions" requirements in this use case.

See also another use case example (Use Case 9) in the Adverse Event Use Cases confluence page.

At the 17 January 2020 PCWG FHIR call, it was argued that the ankle/pedal edema, increasing tiredness can be considered as "conditions" and hence captured as "resultingConditions".

Consequently, there is no need for a "findings" or "reactions" data element.

This argument, however, leaves an unresolved issue - where/how to capture "overdose reactions".

There are other clinical scenarios/use cases that fall into this same category. For example: a common hazard of CAR-T (chimeric antigen receptor, which is the introduced T cell surface protein that homes in on cancer cells) cell therapy is dramatic inflammatory response. The hyperinflammatory reactions can trigger high fevers and symptoms of organ damages, and are results of immune cells churn out excess molecules called cytokines that are toxic to different parts of the body/organs (e.g. heart, brain) - cytokines reaction syndromes (CRS). There are needs to capture the signs and symptoms of fever, organ damages, and the overall condition - reaction syndromes.