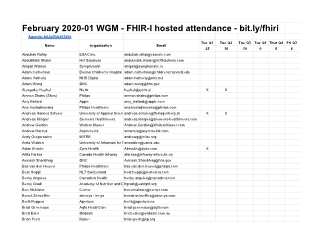 Question from PA. Would like to add encounter.start and encounter.end search parameters. Is there a better pattern to follow?

Lloyd gave an overview of CapabilityStatement and it's history (why parts are normative and other parts not, etc.)

Graham discussed adding "feature" to various parts of  that would repeat and have a terminology binding to a set of features, likely a boolean for whether or not the feature is supported. Would also require the context (a triple of context, feature, and value), but the context is defined by where it is (such CapabilityStatement.rest.resource). Could potentially also contain a condition stating something like "we support this, but only for X", and documentation which would be markdown describing the feature.

This would allow clients to ask for the feature set they need, such as a set of SMART features.

Maybe instead have one set of features on the root of CapabilityStatement and make the context explicit on each feature.

Discussed servers with multiple endpoints. Right now each has their own CapabilityStatement at endpointx/metadata.

Grahame will get a list of all trackers that are validation issues and provide to Yunwei to send an email to the submitters to check if there are still issues, and if so to submit a test case demonstrating that fact, since Grahame thinks that most of these are fixed now.

Decided to rename to Full Structure instead of Full View. Will also add text to that tab describing what it is that mentions the old name "snapshot".

Will do, but try to find a better icon than US Core. Grahame will implement it as a popup and get feedback to see if it should just be a static button.

Agreed to add support for this and update the NPM package spec, though the HL7 package stack and server won't support this.

Need the URL of the bad example so will assign back to the submitter.

Grahame says the ID column shows the end of the OID for the value set, but it's not really useful here to he will remove it.

Changed to a technical correction, as it has already been fixed.

Pretty sure JSON signatures don't work at all, and the XML ones may work but need more experience.

Should have a Connectathon track before we make changes such as what this tracker suggested, such as propogating signature everywhere.

Thanks to Michael Donnelly for the following minutes:

Michael Donnelly: Lloyd: we know how to canonicalize a signature on a single resource but not on broader or narrower concepts.
Grahame: why does IHE need this?
John Moehrke: Not certain
GG: Are we content to wait for an implementer to push on this, or should we do so?
MD: wait for implementers
John: agree, though this is time wasted where nothing is used
GG: assign back to balloter?
LM: that's me
LM: e.g. Provenance can apply to multiple resources, so it's unclear how this would work.

Michael Donnelly: Lloyd and John discussed details of stitching, of metadata. A signature element contains a manifest of what was signed.

Michael Donnelly: MD: How soon are we to the point where this will trip up someone?
LM: hasn't happened yet; could be tomorrow
John: that's why we have a "here be dragons" indication on this non-normative content

Michael Donnelly: John: the stitching problem is addressed because a signature in and of itself isn't a signature of a single item, it's a sig of everything in the manifest. When you validate, you rely only on what's in the signature blob.

This specification defines the following method for canonicalizing FHIR resources, when represented as XML:

Will change the JSON as follows:

This specification defines the following method for canonicalizing FHIR resources, when represented as JSON:
The signed set of fragments SHALL be transformed such that:

Michael Donnelly: The WG adjourned the quarter at 15:32.